As the season is ramping up for new releases - here is Kospet’s latest addition to the Prime series.
The Prime S.
As mentioned in the title - it is Android 9 running on a new chipset from Unisoc.
Rather than MTK this is a fairly new chipset for watches but performs very well indeed.
This model also has a dual operating mode like the Optimus 2.
It can be used in either mode as described in the details below.
Unlike the older versions of dual mode - you can make use of the watch’s sensors for sports activities etc, while you are in low power mode.
This also helps in Android OS mode as a hand off takes place allowing the sensors to be used by the low power chip rather than the main chip doing all the work.
The phone is not active in sports/low power mode.
Pretty cool stuff at a very reasonable price !
Available here: 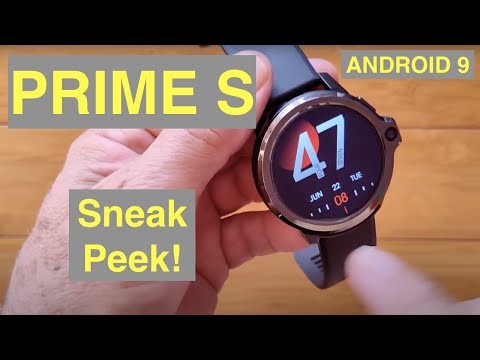 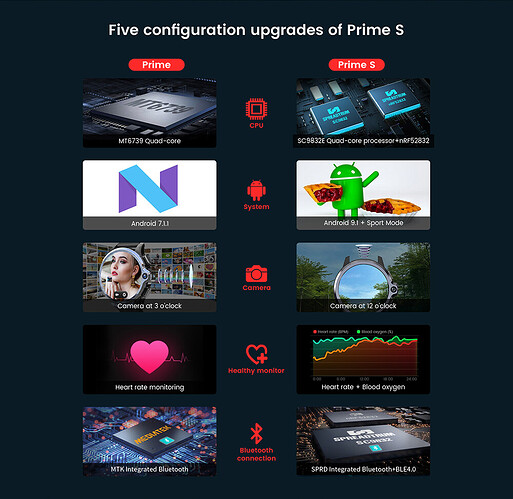 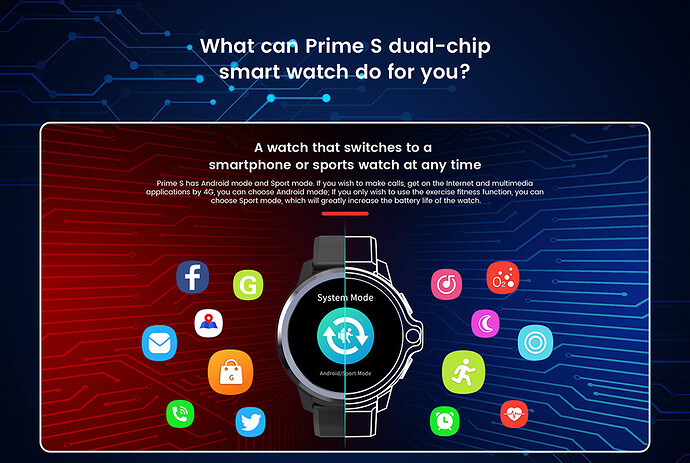 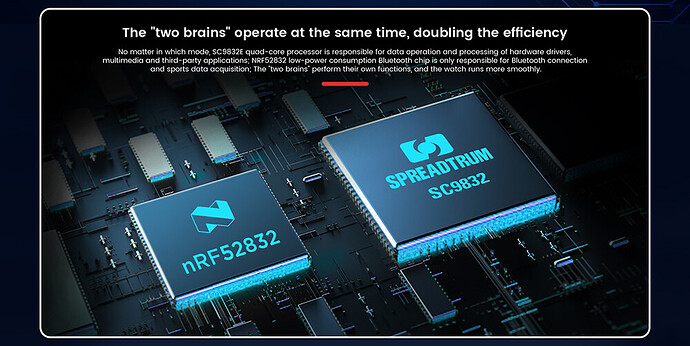 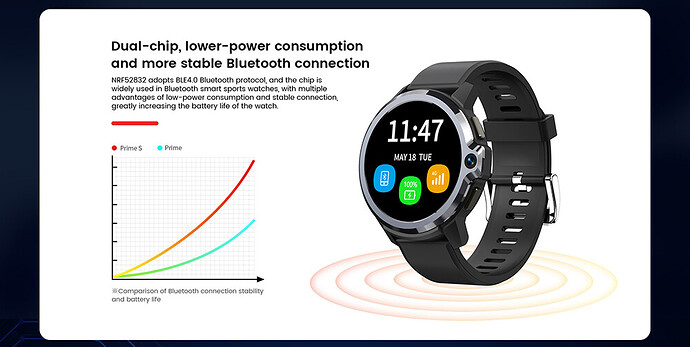 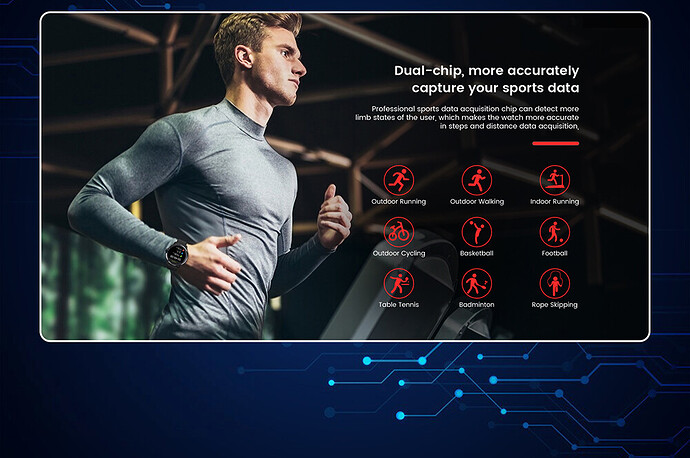 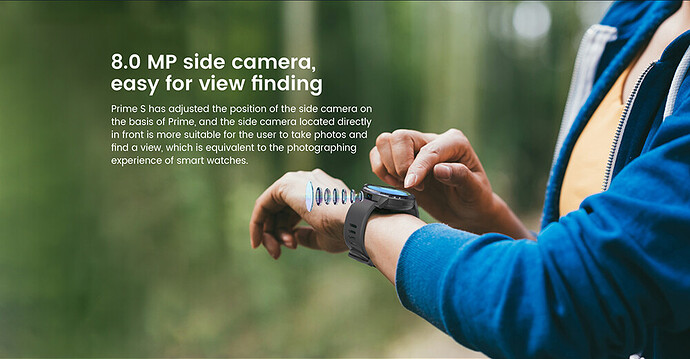 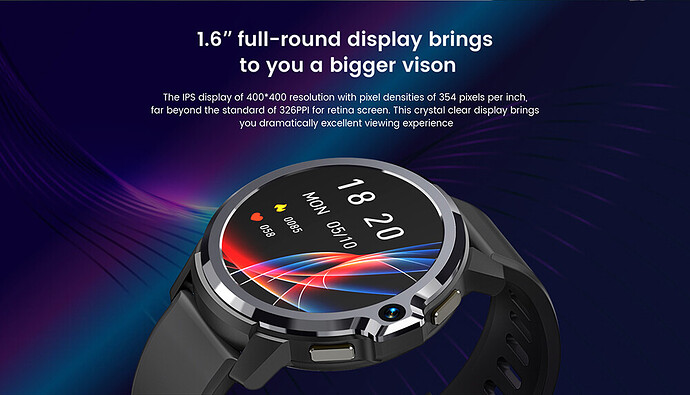 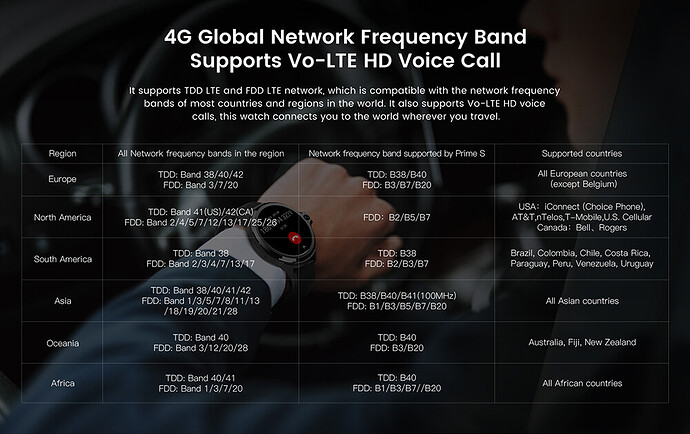 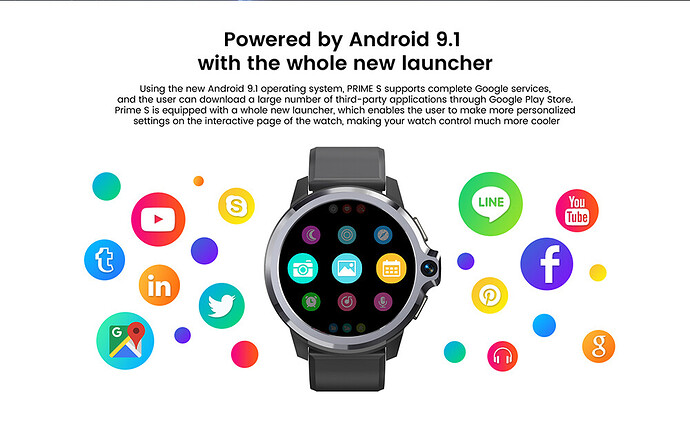 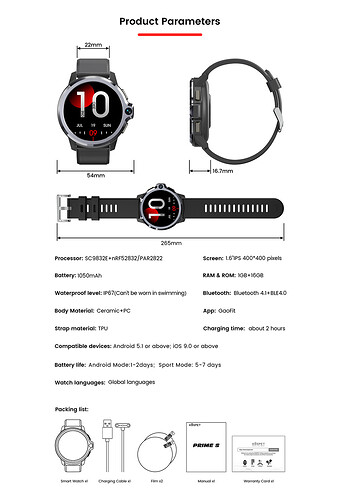 Again, just so everyone knows…
The LEM P, Prime S, Optimus 2 and any of the other supposedly “Dual Mode” watches are not Dual Mode in reality.

Unlike the original Optimus watches that did have “dual operating mode” and the watch would boot into the BT environment.

This is because the Dual System mode is actually just a cut down version of the launcher that prevents the user from using the majority of Android apps and some services. So booting into the BT system is not required and does not happen. The BT system chip in this case is used to handle the sensor information and it does a good job of this.

On these devices, when you use the “other” operating mode you are effectively invoking a strict power saving mode - but only because the launcher changes and prevents you from accessing the regular apps.
Hence if you can get around the restricted launcher - phone calls and everything else still works as normal. You can easily verify this by installing a third party launcher.

I am saying this because I believe it is fair to be honest about the so called “Dual System” mode and I believe that the brands have not been completely transparent about this.
In fact, to the extent that I actually believed (before I got the devices) that they were indeed like the original Optimus watches and we would be booting into the BT chip environment.

Main menu - optimization - clean task - tap on the white text - then tap the green circle on the app you dont want to sleep when the screen is off .

All of the above is a little different to some A10 and A7.1.1 watches

A post was merged into an existing topic: Prime S teething trouble

i have to hard reset it everytime after switch mode , if not all the sensor not working.

What firmware version do you have?
There will be an OTA soon.
I have V1.4.

I have KOSPET_PRIME_S_V1.3_20210603 @pablo11 AFTER our firmware flash. Same firmware you flashed to yours, right? And you’re on v1.4. Very interesting. No OTA waiting. This gets more and more interesting.

Yes Mr Ticks.
V1.3 is currently the latest and v1.4 is a WIP.
In your excitement earlier

Same version here too.
That looks like all an adventure flashing this watch !
Congratulations to you for this achievement.

Factory reset it.
Mr Ticks had issues before I flashed it for him but now it seems to be ok.

Trust me, it’s easier than flashing it

@pablo11, good advice to factory reset anyway. I noticed before the reset that the heart rate, blood pressure, sleep, and breath training didn’t work. Now after reset they appear to work, though I won’t know about sleep until tomorrow as I just reset this morning and not before going to bed last night. Also worth noting, the fitness now reports heart rate on the workout screen and not just zero, so that interface is working as well.

So the watch is working again just like before and a factory reset after flashing appears to have cleaned up some stuff that was lingering related to the sensor diodes.

Lots of confusion about this device and unexpected behaviour etc…

I just wanted to remind everyone that the watch is a budget product designed to fit the needs of people who do not want run lots of apps and just want a decent cheap watch.

With only 1gb ram and Google Play services and Android 9 running - you can imagine that there is not much headroom to run anything else.

If you are thinking of running apps, universal launcher, lots of watch faces… You should not be buying this device.

There will be a 3gb + 32gb version coming if this is what you want to do.

This version is perfect for people who just want to leave it as it is and use it as a watch and use the built-in apps.

Running more Google apps and other things will just end up with you needing to reboot the device to get sensors working again and free up ram.

So I just wanted to make sure that everyone understands what 1gb of ram means when you are running a more recent version of Android OS which uses ram differently to Android 5.1 for example.

Just don’t want people to get the wrong idea about this product.
It is a decent budget device.
Just don’t expect to be able to do too much “outside the box” stuff with it.
Cheers.
Pablo11.

I can give you the firmware but it is not easy to flash it.
My advice is to contact the seller.

If you have no other apps installed and you have reset - it should work.

Please return it.
Kospet will help you with costs

Hi I’m new in Full Android Smartwatch. Please be kind to advice how to get notifications for WhatsApp and others stuff like in the Google Wear OS in this full android smartwatch stand alone. Thanks for the answer I will appreciate.

Do you have an android smartphone or an iPhone?

Have a look at Mr Ticks review.
It is a new app. 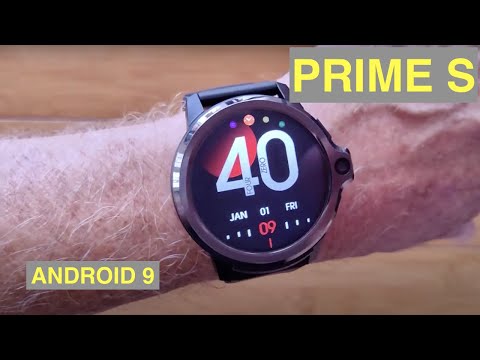