Here it is, version 0.14.0 of WFD. This one is a major release. It may not have lot’s of new things (it has), but the new things are major differences between what we had. Specially the support for the NEW ANIMATED DIGITS on Eric’s Universal Launcher. 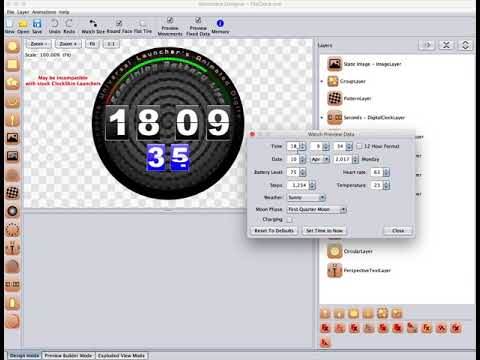 This software is amazing! So easy to make great watch faces quickly.

You are incredible. Thanks a lot for this great software!

Amazing…Thank you for all the hard work you put in

I’m looking at the flipclock and can’t figure out how this works in WFD.
Do you have a how-to or a simple example XML file?

Nice job and thanks !
Was wondering if there is a way and or to add in the next ver a ( 24HR Option in the digital Clock area ? )
I see one for when you make a watch hand … but the option is not in the Digital Clock Area …
Thanks for your hard work !

@Warlock_Weary The Digital Clock defaults to 24h unless you add in items for the AM and PM fields. If you are just referring to the Hour only digital clock, it’s 24h unless you set the system on the watch to 12h.

@Marco_Ferreira I’m still experimenting with the new features and haven’t had the time to make any complete watchfaces yet, but I like the new functions. A++
My daughter actually interested in learning how to make faces and she’s 11.

@Warlock_Weary if I understood correctly, you are talking about an option to force a digital clock to be in 12/24 hour mode. Unfortunately launchers do not support that option. I don’t know if Eric would mind to add it to Universal Launcher. If he doesn’t mind adding it, I’ll add it also to WFD.

@Bert_van_de_Bovenkamp @tim_Collins I’ll make a video of it. Keep in mind, however, that you will need to have the images for the transitions already made. WFD doesn’t (yet) generate them automatically

@Marco_Ferreira The day WFD will create the images for the transitions by itself, I will visit you and spend a day on my knees infront of your house.

I spend the whole wednesday to create the pictures for that what I want to do, and I’m still not finished…

@G1NT0N1C it’s nearer than you think. The transitions on my demo watch were generated by WFD. However it is still a bit hard coded and that’s why it’s not available yet. But will be (hopefully on next .0 release)

Ups. Then I should have a look for good knee pads…

@Bert_van_de_Bovenkamp @tim_Collins @G1NT0N1C
Here is the video: https://youtu.be/nCuMjOCwy2c
When I published this, Youtube was still processing the video so only 360p was available. I hope that by the time you read this, youtube has already fully processed it and you can see the full resolution video.

Please take into account that you DON’T have the tools menu yet. I’ve just implemented it so I could more easily do the video. As I said, I had implemented the routine to create the transitions before but it was (and still is a little bit) hard-coded. Now, at least, I can choose the images graphically, but I cannot, for example, set how many images it will generate

Just released a new version: 0.14.1. It brings nothing new, just fixes some bugs detected by me, @David_Koren and @G1NT0N1C . Download link (besides the forum, of course): http://bit.ly/2NBiYKg