My cursing watchface. One of my early faces that needed stocklauncher and 400 x

My cursing watchface. One of my early faces that needed stocklauncher and 400 x 400px screen resolution. Here comes the version for Universal Launcher, requested from @Vicky_Icecreamwala

For the Stocklauncher version you have to use 12h Mode. 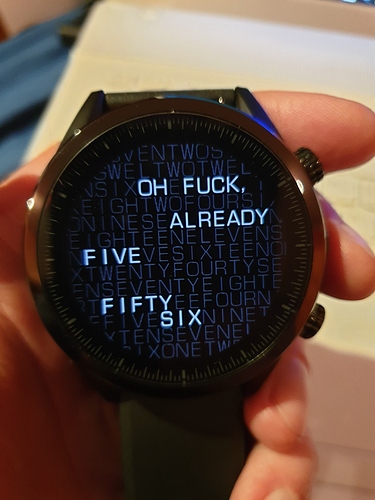 @Paul_Worth That’s not my fucking problem!

@G1NT0N1C
Thank you for the Universal Launcher edition.
Great work!!!

I wanted this watchface in resolution 300x300, because the stocklaucher has a low quality in my Lemfo LF17 and the universal launcher has a better quality but the numbers do not appear

You have to install Universal launcher. Then it will work.

Is there no other way without using Universal Launcher? When I researched the 400x400 version I was testing and removing some files called “filter”, I discovered that this was what made it visually unreadable. But some things are still illegible so I wanted to know if there is anything else I can do, since I do not have much knowledge in this area

You removed the filters???

it can’t work without. It needs the filters, then it works with Stock launcher on 400x400 Screens. Or it needs GIF’s, then it needs Universal launcher.
There are two more posibilities:

1)buy another watch or
2)don’t use this face

I think you should think about install Universal Launcher. You find a video in our YouTube channel how to do it.

I managed to do it, and it is working perfectly, however, some numbers like “hour_num_1” I need to edit in photoshop to change the background colors to black

In fact, I removed the files called “gitter_o.png” and “gitter_u.png” and other similar images was what I was referring to in “some filters” and with that it worked (some parts not yet), but the great problem is that I really wanted this watch face, but I did not want to use the universal launcher, since it got ugly on my smartwatch, and how I got to do part of the job I ended up having a hope of trying to make it look “right” in my lemfo lf17, so I asked for your help.

Feel free to test out whatever you want. This Filters are needed to display 12 different Texts instead of 10 digits:
1=one and eleven
2=two and twelve
The other digits are easy. Ok, how to display two textes on the same picture? Imagine a chess board. The 1st picture is on the Black fields, the 2nd on the white ones. Now you can use an other digit to cover the one or the others. Do you understand?
Of course its possible to use the same trick on a 300×300 screen, but it needs to make new pictures for that. And I won’t, because its a lot of work for just a few devices. Feel free to make a 300x300 Version, but you will have to use this way, because there is no other.

@G1NT0N1C what are we gonna do about the new 360-ish and 460ish size screens? Most faces will scale, some may not.

Simple. We will ignore them.

If you don’t want to use UL, here is a way to use this face for you:

Ever wanted to have your favorite clock skin on your phone ? This animated wallpaper brings you "clockskin" and partial "watchmaker" skin as a background wallpaper. You just have to put your favorite skins in the "clockskin" directory at the root of your extra memory. This wallpaper uses the same engine as my other app, the Universal Launcher New Gen. Community to get clockskin : https://plus.google.com/communities/10982724260752455271...

This face is very cool,I love it a lot.
thanks for sharing it.