I am trying to install StepSetGo app in my Kospet Prime but I am getting error 940.
Can anyone try installing or has anyone been able to install this app successfully? Here is a link to the app:

The concept is simple. Walk to earn SSG Coins. Use these SSG Coins to redeem awesome rewards. Rewards can be exclusive discounts or amazing products that are completely FREE! The aim is to make walking fun again, even if you stay indoors. 1000 Basic steps (Indoor steps) = 1.25 SSG Coins 1000 Outdoor steps = 1.00 SSG Coins That's not all. Head on to the Arena page in the app where you can compete with your friends and even challenge yourself to collect even more SSG Coins. Customise your pro...

I don’t know if you checked but when opened GPS to view the app at the top it says, “This app is incompatible with all your devices.” My devices includes two Android phones, (Samsung G7, Kyocera Duraforce,) an Android tablet and several Android watches. None are compatible?

If you still want to try it I found these suggestions on how to address the issue. 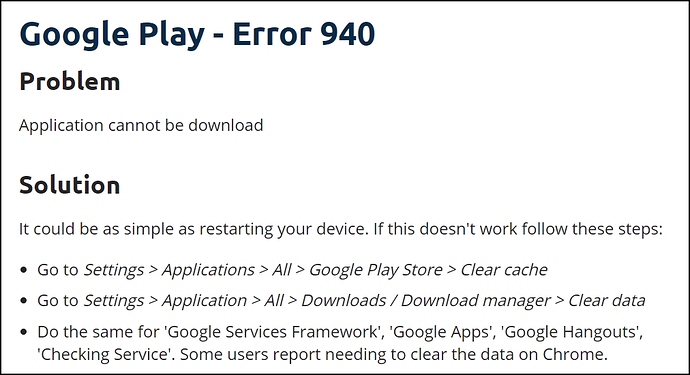 I questioned them about this. They said that your location has to be India. It is India specific app.

I have already tried all this but it didn’t work.

I have tried this as well. While registering, it gives the error that you cant proceed since this app has not been downloaded from the playstore.

Have you tried downloading the app onto your computer and then adding it to a file, I use “Apps” file on your watch and installing it that way. I use this way to install most apps on my watch after transferring them from my phone or computer if downloaded there from the Apk pure site.

I downloaded and transferred an old version of the app, to an older watch Les1 just to be safe. It installed but I got the same message about not downloading from the Playstore. So based on what you said earlier it probably will only work if you are in India. Maybe it requires you to be connected to their server to function?
Just out of curiosity do you get the same “not compatible with any of your devices” message when you select the app in the Play Store?

Just out of curiosity do you get the same “not compatible with any of your devices” message when you select the app in the Play Store?

Yes. Right now I am in Canada and I get the same message.

So based on what you said earlier it probably will only work if you are in India. Maybe it requires you to be connected to their server to function?

It installed but I got the same message about not downloading from the Playstore.

@noidremained I got the same message.

I don’t know this. Could you please elaborate?

Usually after downloading apk, I transfer it to my watch using watchdroid and install it.

If you are referring to my “Apps” file it works like this. From my computer I download all the apps I want to be available to install on my watch, when it is new, into the “Apps” folder I install on the watch. I then install the apps I want to use, from this folder to the watch.
If I need to re-install an app its already on the watch. Or if I perform a factory update I just re-install the “Apps” folder and re-install the apps I just find it so much easier than going to the PS and installing each individual app that way.
I use the App Backup and Restore app to keep a current copy, when there is an update to the app so I have the most current one. Its a procedure I learned from watching Mr. Ticks video’s.
It may not be everyone’s cup of tea but sure makes my life simpler…