Saw the Garmin D2 Delta and liked the look of its skin.

Saw the Garmin D2 Delta and liked the look of its skin. So created one based on it cause I dont want to buy one… 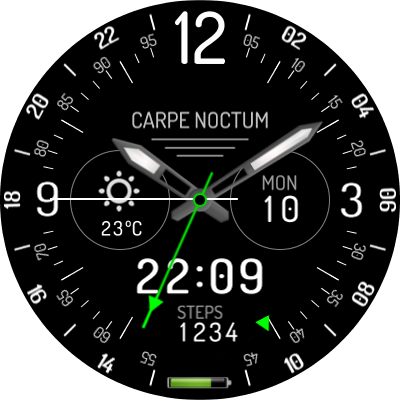 Did you make the Battery-Level-Animation with WFD? Or how it works?

@Marco_Riedner Was just a series of battery levels (10 in total) then you place them in a digital battery array Replace the digits for the battery levels pictures. 0 being full as 100% shows as 0 as you only focus on the 10ths.

@Cerebral_Flex did you make it with WFD? The digits are 0 to 9. its a combination of digits. Digit 7 and 0 = 70. i tryed to make a Import to WFD. The Setup is not komplete.

@Marco_Riedner No, I used a picture of a full battery and made it into 10 segments. You can only use the 10ths, 10%, 20% etc for displaying power. so you mask the other numbers. Example when its 100%, you mask the “1” and the last “0” so its only ever the middle digit showing which is now a picture.

ok, now i understand it. Is working! Thank you

@Marco_Riedner 0% = picture of an empty battery yes : ) a nice touch is to leave the core of the empty battery picture transparent and place a blinking red bar under that layer (use the seperator in the HH:MM array). So it blinks red when at critical.