Available in my blog.

Once again, the biggest soccer event in the world is here. Today, the FIFA World Cup Qatar 2022 started and we are facing four exciting weeks for soccer fans until the final next 18th December.

And, once again, as in the 2020 EuroCup, KYR Watchfaces brings you the watchface every soccer fan must have! The background shows some artwork created for this World Cup, as well as the Qatar 2022 logo and its mascot, called La’eeb. For the displayed info, the watchface uses the same font as the official logo. And last, 8 of the hour marks are represented with the seals of the 8 national teams that won this tournament.

Will there be still 8 winners in World Cup history, or will we have a new one? Next 18th December we’ll know the answer.

No matter if your national team qualified to play the World Cup or not, if it doesn’t make it beyond the groups stage, or if it qualifies for the final rounds. If you’re a fan of soccer, you definitely need this watchface!

IMPORTANT NOTE: The tap options in the version for Android 10 ONLY works with the stock firmware, and NOT in the different beta “International FAW firmwares” that are being developed by Full Android Watch and Wiiteer, because some of the apps used changed from one version to another, and others disappeared. Some of them may work, or not, in those firmwares. Keep this in mind if you’re using any of those firmware versions. 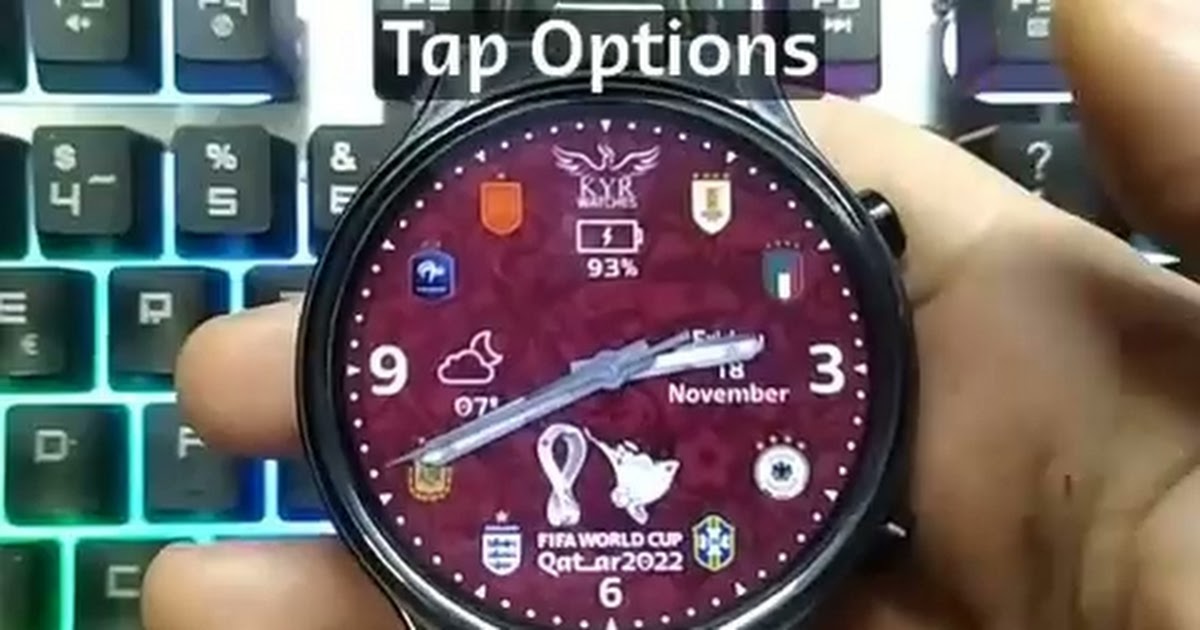 While I’m not an unreserved supporter of this soccer World Cup, I still like this watch face. Thanks very much!

You did that on purpose didn’t you?!! I mean as soon as you heard that the ole Doons had finally put Universal Launcher on his Prime 2. the first thing…the very first thing!!.. you did was post a face that is for Stock Launcher and Stock Firmware!!! Well by Golly it isn’t gonna work mate! I am demanding (Ok, Ok, ASKING!

) @G1NT0N1C That you are restricted to posting on UL faces for the rest of your natural life! Put that in your pipe and bloody smoke it!

Nice one mate! Cheers, Doons
P.S. Nice vid mate, but you really should hire a “hand double” I mean that claw of yours looks like it’s been digging ditches for the last 40 years!

If they were stock firmware and stock launcher when you were using the FAW firmware in your Prime 2, what made you think it would be different with UL?

My Memory is as good as ever was Knrh…er…yrnh…oh hell! You know who you are! And I thought it might (I said MIGHT!

) be different with UL because everyone (Yes, you included!

) has been telling me for years how wonderful UL is and to get it ASAP! And I agree 100% with your… “I don’t f***ng care about where the World Cup is” (Naughty, Naughty!

) as long as it is in Australia! Cheers, 'Corner Kick" Doons

different with UL because everyone (Yes, you included!

Me? The same ME who used it once, about 5 years ago, and never used it again (including all the time I’ve been here)?

Folks…I think the Kyrnath who is on here now in NOT the original Kyrnath! No way to tell for sure yet…but lets all of us watch him very closely!! Cheers, “Detective? I think my mate Kyrnath has been kidnapped”!,