I already told that I’m not an expert and everything I write here comes from what I read on the web.

Cartier is one of the most famous luxury brand in the world and, I must confess that is new to me, it has arguably the greatest design DNA of any watchmaker around.
Many of us, probably, don’t know that Cartier created (one of?) the earliest commercial wristwatch.

Louis Cartier had already made a name for himself as a jeweler in the late 1800s. But Cartier came into its own as an important watchmaker in 1904, when Louis Cartier was approached by his friend, famed aviator Albert Santos-Dumont who told his friend Cartier that he simply needed quicker access to his watch, which he was forced to pull out of his pocket mid-flight. And so, it was in 1904 that Santos-Dumont would take flight with a watch on his wrist.
Dumont’s love for his Cartier wristwatch was so profound that by 1911, Louis Cartier decided to commercialize the product he made for his friend.

After the Santos-Dumont in the 1911, the Cartier’s prodigal history of wristwatches continued with many other creations that have become milestones, Tank, Tortue, Crash, just to name some.

But not only has Cartier an impressive history of making timepieces, it is also an incredibly impressive manufacture with skills and craftsmanship.

The wristwatches I would homage here are part of the contemporary Calibre de Cartier and Rotonde de Cartier collections.

The watch faces were created using pictures from Cartier official web site, the Gimp software to extract the watch parts and the ClockSkinMaker software by +Ricardo Romero to quickly assemble the final result.
They were created based on +A1 Web requests who I wish to thank here. 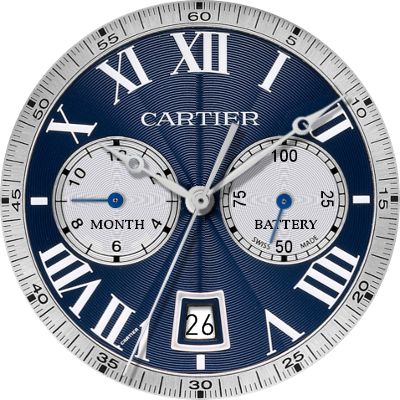 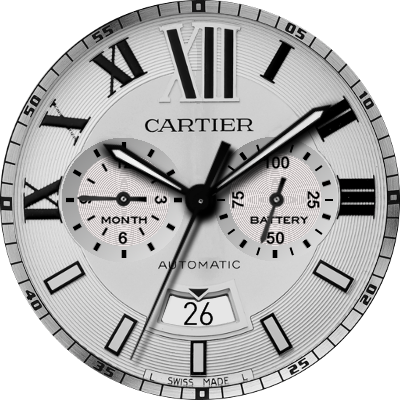 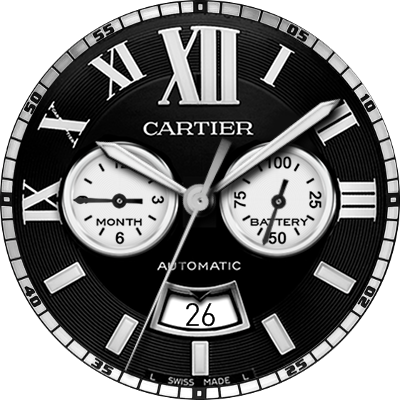 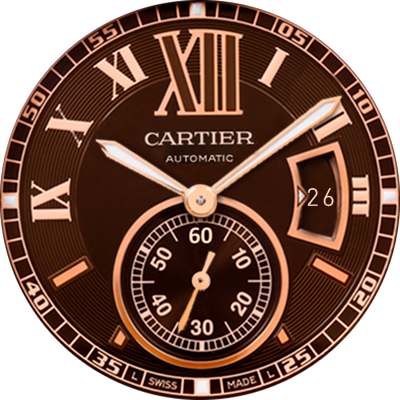 Thank you. Blue and white faces required 2 weeks of my spare time.

Love the white one

Does cartier make any feminine designs

@Splen_Dence Cartier is THE master of women’s watches

Ciro can you please create a few women’s designs, thanks in advance

@Splen_Dence ​ I suggest you to visit the Cartier website, admire their creations, choose one or more models, fill a face request then I will try to recreate them. But you have to be very patient because, as I already said, I have very few spare time

Your designs are great…

Well, thank you, but in fact the design is from Cartier, not mine, I only adapted it to our watches