Hi guys. I've been away for a while.

Hi guys.
I’ve been away for a while. There are probably many good news about our watch I’ll still have to take the time to go through.
But first I’d like to share with you a watch face I’ve started a while ago. For some reason, I have decided to start with the hardest one =)
It took me several weeks to finish it, mainly because I have a full time job and two kids =)
But also because it was a real challenge to me. As we do not have the tools to do it the easy way (at least we did not have by the time I started it), I had to think a lot about the logic behind it to make it work with layers.
It’s obviously inspired on the Real LED design (https://play.google.com/store/apps/details?id=com.marcotronic.realledwatch), but except for the weather icons, all the rest was made by me, from scratch.
Please keep in mind I’m not professional. I did it just as a challenge to myself, but I really liked the result and hope you enjoy it as well.
I think because of the colours I’ve used, it’s pretty hard to see the time on direct sunlight, but it works pretty well at night or indoors. 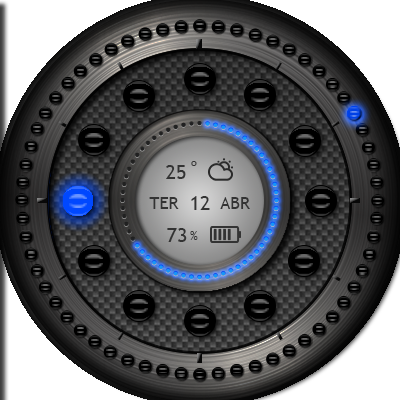 (Very much interested in how this is set up… I assume some sort of wizardry involving masking and rotation?

Thank you guys! Glad you liked it.
@Toon_Kersten ​, seconds work with two sets of images. The lower layer, lights up the leds (groups of 10 leds). The upper layer masks all the leds, but the ones that should show.
The minutes work pretty much with the same logic, but it lights up only one led per minute (on each group of 10), turning off the previous, instead of keeping them lighten up as in the seconds.
For the hours it’s a whole different logic. I had to use two layers plus a hand in the middle of them in order to work on both 12 and 24 hour options. Every hour the upper layer has 2 or 3 transparent leds, but only the one that has the blue hand underneath it appears to be lighten up.
The middle round display was the easy part, except for the battery gauge, which I had to use 3 sets of images in order to accomplish the effect of showing 1 bar for each range of 20%.

Thanks for the explanation Alessandro Domingos! That sounds very impressive!

@Alessandro_Domingos Thank you very much.