Hi everyone SMALL OTA FOR THE KW88 - out now!!.
As the title says - there is a small OTA out for the KW88.
Nothing much changed except the names of the face creators have been added in preview mode - well - it’s a work in progress. Other than that nothing new.
It does give an error on the recovery screen after the update but this is ok and has been tested by us. Your watch will boot up fine and reflect the new build date.
So don’t be worried if you see this on your screen… 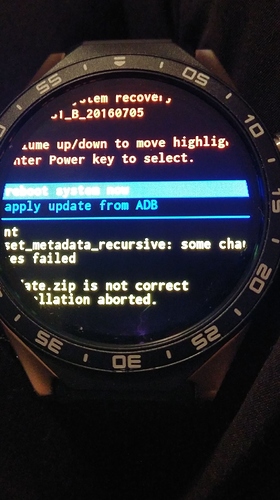 When is the next major update due?

i think to sell my finow x5 and buy KW88, cause KW88 serve better support

@C_For ​ hi do you have videos of the watch in action? just ordered mine hopefully it reaches soon.

@Miguel_Tan No sorry but @SmartWatch_Ticks has announced he will have a video soon on youtube.

Yes, video is well under way and will be announced soon. He’s part of the team so you can count on it. In fact he’s told me that it’s ready to be published but he’s going away for the weekend, so patience please

@C_For they are saying that a major update is due very soon and we will announce it as soon as possible. They are hoping that the iPhone Bluetooth issue will be fixed in this next OTA. This first one was more of a test than anything else

@Pablo_Eleven_Pablo11 ok sounds great. What about faces? Is it possible to get the flip to turn on face changed. It’s pretty ugly!

@C_For
its all coming soon. Completely different method of customizing as it stands at the moment.
But both manufacturers understand that it is a major feature and want it very much.
I can’t see them dragging their heals with this.
I am actually confident that the engine itself is almost exactly the same as the one we are all used to.
They just need to open up a scanning directory - same as the ClockSkin folder on the X series.

They have both (IQI and KingWear) mentioned the idea of a future developed Sinwear app loading the faces - much like Android Wear - from your phone.
Personally I would prefer our tried and tested method as there should be little or no conversion effort involved if my theory is correct.

Can they keep the battery saving mode it switches to? I think this is an excellent feature. my battery lasted ages when this kicked in. @Pablo_Eleven_Pablo11

Anynews for when the new update is comming?