Hello to all creator!!! I am a question for you...

Hello to all creator!!! I am a question for you… I have seen a lost differents faces done by you and I have feel that to my watch ( D5+), just. Because it has a circle black ring outside… the better for me are the black faces with whithes dials… in other hand I have seen that a few faces are made with photo… and other are made in full by the creator… for example… I love this Rolex skin in red… but others skin are photos from the watch and they don’t fix good for me … can some body do this on BLACK, and white dials??? 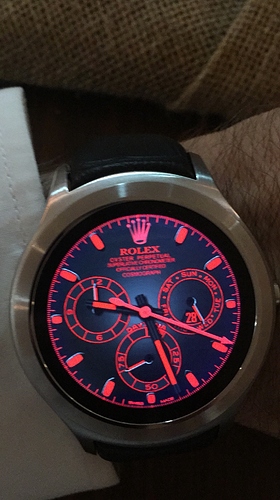 So, are you asking that all the red elements in this watchface will be changed to white?

Hello,
I think you’re wrong when you say “a few faces are made with photo…” Most faces based on original watches are often 're’created from scratch using photoshop or illustrator ;o)

(IMO), As long as faces are “homages” to original ones, it would not be fair to change anything on them (except a few adaptations…)

Roland… your sinm for example fit perfect!! You know what I mean? The black faces fit better than the originals color faces in real watches…

@Roland_Tanguy_Lannuz that was a mistake i did…

… I bought the mine in silver…

Hi. I do some graphic work but I’m novice in this clock-skins wolrd. Has anyone tried to make the black clock-skins without background image (black) and just a transparent layer? Does it look better? If done in the new ones it should be very easy to change the clock-skin color like @Djchk ask for.

Yes, the background image is not mandatory… you could just draw hands it would work fine…
Just get any simple work and you’ll get easyly how it works…

Hi @Roland_Tanguy_Lannuz . What I want to say is, has anyone tried to make a black clock-skin without black backgroung not just for the large bezel but even behind the dials. It means all graphics are drawed on transparent layer not on black background (rolex expl: just red lines on transparent background). If done do you have an example please. Thanks

@Malek_Oueriemmi with no background or transparent background, a black background is always there

Thank you @Ciro_Danise . Do you have an example of clock skin with many dials but no backgrounds, just the back oled screen pixels off?