Hello everyone! Please, could someone make for me this Raymond Weil Geneve - Iron

Hello everyone!
Please, could someone make for me this Raymond Weil Geneve - Iron man special edition watch face for my KW88 (universal launcher one will do). Thanks a lot in advance. 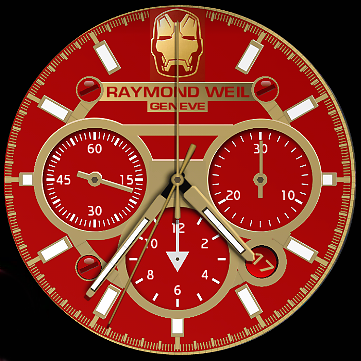 @bricky_vl sir please if you can do this I will be grateful to you. Requesting you especially as you had made one for me (in slate black - silver colour) on my request earlier and assuming you still have a template to it.

@Cosmo_De where do you found it? It seems to be an existing watchface for wear?

I believe this was done by Dave Kirby on watchmaker. Honza usually just does reshares.

@Stephan_Schwobel ah ok, thx. Then the permission of Dave Kirby is needed.

@G1N_T0N1C well he`s no longer existant on G+, so no permission granted, but finding the original watchface woud be the going forward. I would repost with original sources and hope one will do it. he did provide credits.

@Cosmo_De I would like to build it for you but you need first permission from Dave Kirby.

@Stephan_Schwobel @G1N_T0N1C yes sir you are absolutely right. This masterpiece was indeed made by Dave Kirby sir but the link to his G-drive clockskin was dead. I tried contacting him a couple of times & requested to re-upload this clockskin file or fix that broken link but he didn’t seem to respond to my post. I eagerly awaited a response from him for over a month or two. And as you said I was unaware of the fact that Dave Kirby’s account was removed due to breaching DMCA regulations. Truly sad, he indeed had made several masterpieces. After that, I decided & tried to make one for myself with my limited set of skills (please, I’m not a pro like you guys out here). But I could not get the clock hands looking same & cool like the original image shown above. So after giving it a lot of tries, I later decided to put a face request for the same.
Btw this is my try at the watch frame dial -

@bricky_vl yes sir I am aware of that rule, but somehow Dave sir is not reachable or responding to requests made by me earlier. And I’m deeply in love of this clock skin & desperately need it on my KW88. I will be obliged if you could make one for me again if that’s fine by the rules & with Mods permission.