As October is the Halloween month I thought that todays Sunday Funday watch should drag us, kicking and screaming, into the thick of it…

Saw is an American horror franchise created by James Wan and Leigh Whannell. It consists of eight feature films and additional media. In 2003, Wan and Whannell made a short film to help pitch a potential feature film concept. Their pitch was ultimately successful, and in 2004, the first installment of what would become the feature film franchise debuted at the Sundance Film Festival. The film was released theatrically that October, by Lionsgate. The sequels were directed by Darren Lynn Bousman, ... 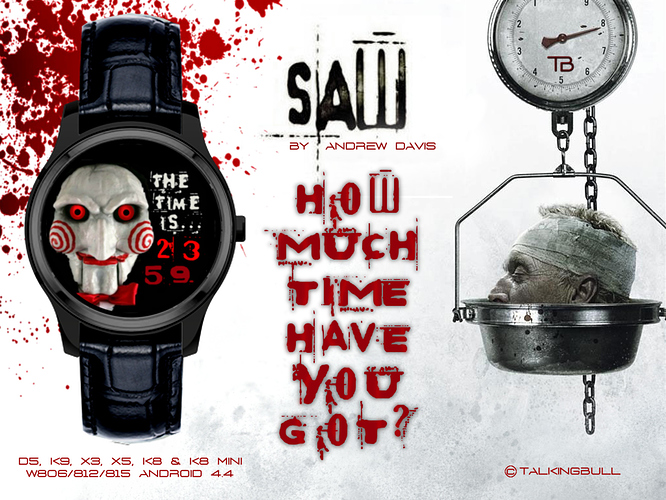 thanks for sharing. what’s that part with the donation and Wikipedia?

Yeah, and let’s make his eyes go tick/tock from left to right

@Andrew_Davis thanks Andrew for explaining and adding the reference to the other post. I truly haven’t seen it. let me give it a try, last time I couldn’t donate from my country through pay pal, when I wanted to support a different project.

@Kenneth_Tan Pretty spooky if you set the alarm to play a custom sound file every hour… :#

I can set my framework to play sounds when I trigger them. You could poke Jigsaw’s Eye and he would shout “Outch”

@Kenneth_Tan That’s cool… a “hotspot” on the screen to initiate a sound?

@Andrew_Davis I’m very busy @TM but I’ve downloaded the file. Couldn’t resist. Going to convert it and try the audio implementation with hot spots. Two sounds"hahahaha" and “Lets play a game”
Need some time, because I have to work for a living unfortunately.
May I assume I have your blessing?

Maybe it can play this sound each time it random reboots?

@Andrew_Davis Nice one, should I randomize?

@Andrew_Davis I have quicly (lunchbreak) tested the capabilities for hotspot and audio.
Everything works very nicely. I have been able to trigger a sound when a graphic or hotspot is touched. Also I have delayed the sound that repeatedly pressing the hotspot does not keep triggering.the sound before it has ended.
Also I’ve incorporated tactile feedback if you press a hotspot. (it feels soooo nice)

Going to test randomizing sounds and then as a quick fix, upgrade the Pink panther. Maybe a short tune. have to search for some good and short Peter Sellers Quotes.

Pink Panther is a story of a world-famous soccer coach that has been murdered and his priceless, ring has been stolen a ring set with the stunning diamond known as the Pink Panther.Lend an ear to some of the movies notable quotes.