And here it is Andrew Davis  his "Pink Panther",

And here it is @Andrew_Davis his “Pink Panther”, modified for every smartwatch as a standalone APK.
Install and enjoy. The Pink Panther is a fictional animated character who appeared in the opening and/or closing credit sequences of every film in The Pink Panther series except for A Shot in the Dark and Inspector Clouseau. In the storyline of the original film, the "Pink Panther" was the name of a valuable pink diamond named for a flaw that showed a "figure of a springing panther" when held up to the light in a certain way; in the credits this was translated to an animated pink panther. The character's popularit... 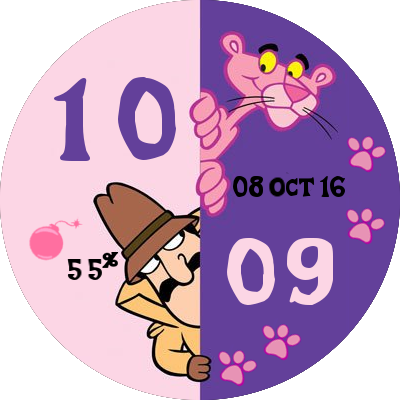 could this apk installed on more than one?

@Andrew_Davis What link did I forget?

@ama_bibie Install it on any Android device!

[Your reply was]… Andrew, I’ll keep all links

There’s nothing left to be done I think. maybe if bugs are found.
Removed the dashes from the date that was ugly if you use month abbreviations.
Was thinking to give the bomb also second animations. Like a burning fuse

How does this (type of) apk differ from those that we used to load onto the KW88?
I’m having problems with my D5 at the moment but you say it should work on that as well?

If the D5 runs Android (4.x I think) it should run without a hitch. It’s installable, uninstallable, without any hooks to the system.
You need to use my alternative launcher method to use it as a WF that shows on powering on the display. Also need to configure some gesture to be able to return from launcher to WF. And I install “Home 2 shortcut” which changes the power button behavior in “press once = home button”. “press twice = power off”
Then you have a fully customizable SW.
Please install and tell me if it works.

It is good! Thanks for you!

@tim_Collins I’m still learning how to program and then how to expand this system.
if you have interesting WF’s publish the links. if I like it, you can ask the designer if he want’s to participate.

Hi Kenneth. I see you code great WF. Have you seen these beauty?

If you could make it working as standalone apk you would be my hero.

I have another question. Did you get rid of the default digital clock face of KW88? I can’t stand it but it is the only way to activate WF by gesture.

@Konto_Nastraty
Switch off gestures in your setup and the digital watch is gone.

I’ve seen the Tissot. Maybe I’ll convert it, but I have a bunch of better WF’s to do first.
Also you cannot just ask for a conversion here. It needs the consent of the designer of the WF before I even consider doing it.

Ok sorry I did not know about it. According to switch off gestures is easy but it would be great to have wake up option and activate tasker with FW isn’t? I feel uncomfortable every time pressing the button to see the time.

I’d have to look into if KW88 supports Tasker looking at the gyroscope without root.

To would be the second milestone for me. I keep my fingers crossed for that.