Hi everybody. I have a Lemfo Lem5 smartwatch and I know how to use

Hi everybody. I have a Lemfo Lem5 smartwatch and I know how to use clockskin that is generally buit with zip files. I want to use a watchskin that’s picture added but it’s format doesn’t support for my smartwatch.

Do somebody know how to use *.watch file format to use for Lem5 or others smartwatch brands?

If someone has clokskin as in picture that I have added, please can you share with us? 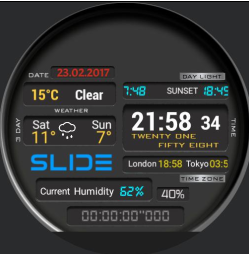 My friend, i want to know the same!!!

.watch files are files coming from the app watchmaker. they work on AndroidWear, tizen and ticwatch. they don’t work on your lemfo.

thats not possible, most part of this … with x series engine.

I have found a software named “ClockSkinMaker.exe” It is working but only get the picture of *.watch file not the whole *.watch itself.

You can install ClockSkin Universal launcher, it supports .watch face even if compatibility is not full.
Read on the tech forum for more information

How can we found the entire doc for clocskin universal launcher? A list of capabilities would be nice to play with.