Earth Moon ISS
https://drive.google.com/open?id=0BysDzZ6Uvo9nZGRKemFCOEZmdm8
So here’s my job application to NASA. It’s not a giant step, but I’ve scienced the s**t out of it and put the right stuff in.
Its base is the collaboration Andrew Davis and I did + a few things I’ve been tinkering with.
There’s something for everybody here, rotating earth, orbiting moon, orbiting ISS, twinkling stars and, the tricky bit, orbiting date and time.
I wanted to put clouds and a comet in but the watch got laggy, so I think I’ve hit the rev limit of the clock engine. The clock_skin.xml is 350 lines long and it takes 4 seconds to load.
The ISS traces out the seconds and maintains its attitude rather than simply rotate. It doesn’t turn upside down (although it twists a bit). 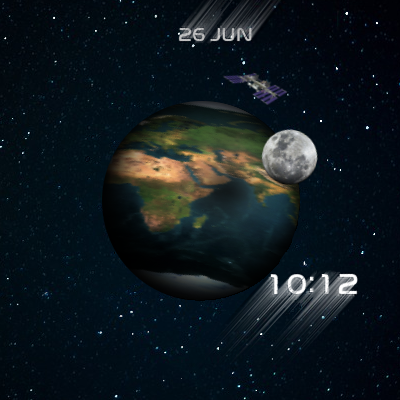 I’m about to email Mr Branson, for a seat on his rocket, so that I can check out your science…

I can give you my Velocity FF number

@Andrew_Somers Solid…
(I might be the only one to find this funny but for the last 2 hours I’ve been reading up on hexidecimal colour coding… and the fact that 00 denotes clear and FF denotes solid)
If it wasn’t for the fact that it’s raining, I would get out more…

D’oh!.. is there enough space for all of our puns?